How Platoon Technology Will Impact the Future of the Industry 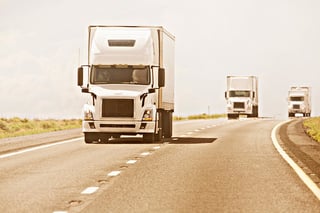 Way back in June of 1978, a movie starring Kris Kristofferson, Ernest Borgnine and Ali McGraw was released. It was called Convoy, and its plot centered on truckers forming a mile-long convoy in support of a fellow trucker’s vendetta with a conniving sheriff named Lyle “Cottonmouth” Wallace.

Fast-forward to the present, and trucks continue to travel in convoys across U.S. roadways, not in a mile-long formation in support of a vendetta, but to improve vehicle fuel efficiency by drafting behind another big rig and cruising along in its draft wake.

But drafting techniques are changing. And, perhaps sooner than later, the techniques used today may become as old school as in 1978, as there is a new technology on the horizon that elevates drafting to the next level.

It’s called platoon technology, and it promises to deliver a wide range of benefits for fleets of all sizes, including increased fuel efficiency, lower CO2 emissions, optimized routing and freight matching.

Platoon technology allows the electronic linking of two or more trucks into a convoy-type formation. The trucks closely follow each other at a set distance apart, using connectivity technology and automated driver support systems that keep them in constant vehicle-to-vehicle (V2V) contact—sharing actions and data. Traveling so close together reduces aerodynamic drag for all the trucks in the formation, which means greater fuel economy without compromised safety.

The truck in the front acts as the “leader of the pack” and controls the trucks that are behind through an Internet connected wireless system. The lead truck “tells” the other trucks what actions the lead driver has taken, and they immediately do likewise without driver intervention. For example, if the driver in the lead truck brakes, all the other trucks in the platoon begin braking immediately.


Coming Soon to a Roadway Near You….Or Not?

Mountain View, California-based Peloton Technology plans to introduce a platoon system in 2017 and has thousands of highway miles in platoon testing under its belt, as well as numerous investors.

In spite of the optimism for Peloton’s technology and optimism from truck manufacturers, vendors, shippers and industry leaders for widespread adoption of platoon technology in general, the technology is not without controversy or its detractors.

Just this past July, Missouri Governor, Jay Nixon, vetoed a truck platooning effort on state highways, citing “unproven technology.” And there are other challenges, such as getting states to change their following-too-close laws; the skeptics who believe that 80,000-pound big rigs can’t travel safely at highway speeds when only 50 to 80 feet apart; and the truckers who are fearful of hackers digitally hijacking vehicle controls.

What is also concerning is the industry’s nearly 40,000 driver shortage and whether platoons and autonomous trucks would be a turn-off to current and/or potential drivers. Some believe that it absolutely would, while those on the other side of the fence believe the future truck is a connected truck and could be the ideal “bait” for attracting the ever-important millennial demographic.

What the panelists on Fleet Owner’s “The Connected Truck” panel at the March 2016 Mid-America Trucking Show believe is that connected trucks in a platoon operation will be cruising U.S. roadways within three years.

With the industry spending more than $140 billion annually on fuel (according to the Federal Motor Carrier Safety Administration), if what those panelists believe proves to be correct, the savings potential could be huge. In fact, Peloton’s testing found the rear truck in a platoon could save an average of 10% in fuel costs, while the lead truck could see a 4.5% fuel savings.

Only time will tell if platoon technology will live up to its hype. But one thing is for certain says Michael Lukuc, a connected-vehicle expert at the Texas A&M Transportation Institute, platoons are the first step to a future rollout of fully autonomous trucks.