Solutions to Curb Distracted Driving in Your Fleet 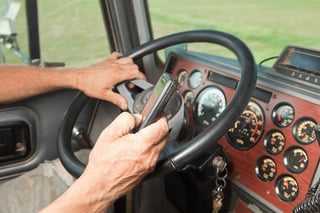 As a general rule, a driver’s full attention should be devoted to driving. If that isn’t possible due to another activity, such as those listed above, it is a distraction and the driver should take care of it before or after their trip and not while they are behind the wheel.

Statistics show that a driver taking their eyes off the road for just two seconds can double the risk of an accident. If you don’t believe that, think about how many times you’ve heard, “I never even saw the other vehicle.”

With April right around the corner, which happens to be National Distracted Driving Awareness Month, as observed by the National Safety Council (NSC), there’s no time like the present to take a look at the top solutions for enforcing better driver behavior. Doing so can help you curb your drivers’ distracted driving habits, better ensure their safety, the safety of their vehicles and of fellow travelers, and the health of your bottom line.

Out of all of the distractions, texting or talking/using a mobile phone or smartphone is the biggest contributor to distracted driving and according to the NSC, the greatest cause of distracted driver accidents.

While talking on a cell phone and driving is less risky than texting or sending email, it is still dangerous. According to Advanced Driver Training Services (ADTS), a number of studies have shown that talking on the phone—both handheld and hands-free—increases the risk of being involved in a crash similar to that of a person with a 0.08 blood alcohol level, which is the assumed level of intoxication in the US.

So what can you do?

For one thing, technology can help. There are distracted driving solutions that restrict drivers from calling, texting or surfing the Internet while their vehicle is in motion. There are also event data recorders that can record a driver’s activities leading up to an accident. Also available are GPS fleet tracking solutions that give drivers voice-guided, turn-by-turn directions, so they are not fumbling around on their phone trying to figure out where to go—which could easily be right into another vehicle or right off the road.

Another solution that some of the largest fleets in the country have had success with is putting a policy in place that bans all cell phone or mobile communications while the vehicle is in motion. Naturally, this involves a period of adjustment for drivers, but an important takeaway is this: according to the NSC, for fleets that have such policy, only one percent experienced a decrease in productivity, 90 percent saw no change in productivity and nine percent saw an increase in productivity.

To get drivers to go along with a “no phone in motion” policy, it is important that they take you seriously and that they know the realities of the costs of an accident attributed to distracted driving. Making a “no-exceptions” rule is a clear way to show them just how serious you are and should include not only drivers, but managers and supervisors as well, as you want to create an inclusive “environment of safety.”

A “no exceptions” rule is only as good as its enforcement, so to that end, should a driver be in violation, make sure they know violations are tracked and that there are consequences.

Establishing a safety policy, getting everyone involved and offering tips on how to stay productive on the road without using a phone and/or putting it on silent while the vehicle is in motion, as well as pointing out how the entire fleet operation and bottom line benefits from such actions is key to your policy’s success and key to curbing distracted driving.

The key to your policy’s success and to curbing distracted driving is to:

The entire fleet operation and bottom line can benefit from such actions.